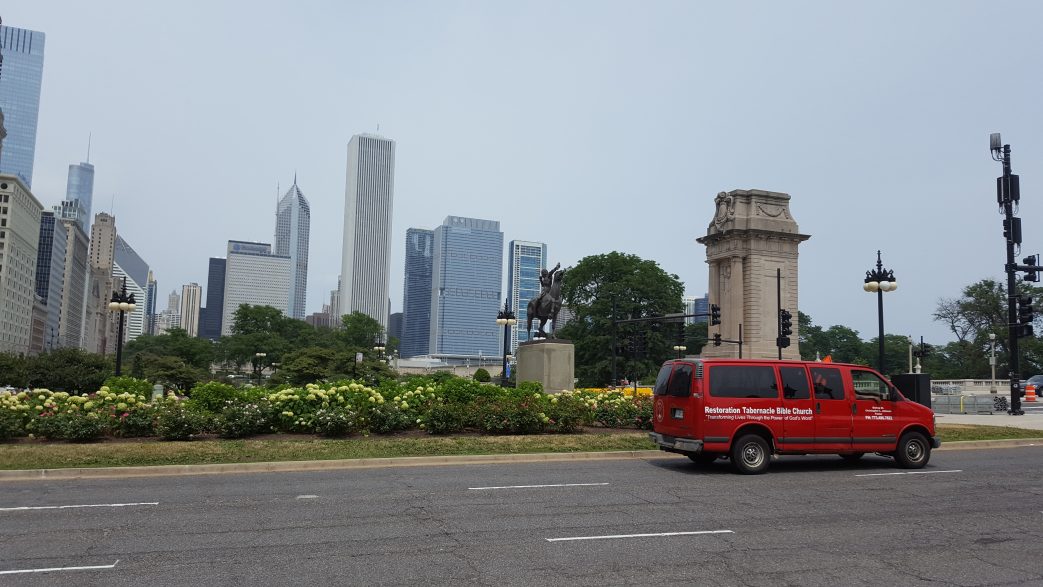 Today our trip begins! We arrived at Heathrow at around 5am. We had a stroll through the airport checked our bags etc and after minimal waiting around we boarded and set off. The plane seemed pretty old and only had shared over head screens, one being almost directly above us and the other being pretty far away. We shared our three seat section with a nice girl called Sarah from Florida. The flight felt pretty long but we landed ahead of schedule. Getting through O’Hare International was also a simple affair.

As soon as we stepped outside the heat hit us! It was late morning by now (US time) but it was seriously hot. After a short wait we jumped on a bus that took us to the National car rental office. We had a good chat with the rental lady who I think liked us as she sent us over to the lot and said we could pick any mid sized SUV we wanted. We picked a white 4×4 Jeep. I stepped up for the drive to the hotel. The jeep seems pretty nice to drive and is well equipped with USB ports, AUX and even SD reader and more importantly, very good aircon. After a 30min drive we arrived at the hotel, Congress Plaza Hotel.

We were too early for check-in so we left our bags in storage and went for a stroll to Lake Michigan, which is opposite the hotel. It was about midday now and it had got even hotter. Sweat was running off my forehead like I had been running. We walked along the lake edge got a Hot-Dog and then looped back around to the hotel. We were still a little bit early but our room was ready.

I was feeling really tired by now and fell asleep almost straight away. I slept for a bit and when I woke I found CJ asleep also and a huge thunderstorm going on outside. We sorted our shit out and decided to try and find some food. It was still pouring down outside so we got some takeout from the hotel restaurant. I had a turkey club and CJ had a burger.

Excluding the afternoon nap, I have been up over 24hrs so I am ready for some sleep.

Update: We went for a walk and another thunderstorm occurred. We took shelter under a building for a while but ultimately had to walk back to the hotel in the rain and got thoroughly soaked. On the plus side we found the ‘Start of R66’ sign.

On Saturday 23rd July 2016, CJ and I fly to and land in Chicago, to begin our road trip adventure. We will be in the USA for 22 days before we fly home from San Francisco. Our planned route (above) is about 3000 miles and will take us along the majority of what remains of the famous Route 66, the Highway of America, The Mother Road.

Along the route we have planned a visit to the Grand Canyon and a short detour to Las Vegas for a couple of nights.

After we reach the Santa Monica pier, which marks the end of Route 66, we travel up to Yosemite National Park where we will cross the Sierras through Yosemite on the way to San Francisco. While in San Fran, we have booked an Alcatraz tour and intend to cycle across the Golden Gate Bridge. We have booked a total of four hotels for this trip so we hope to find lodging as we go or at worst, sleep in the car although I really hope it doesn’t come to this.

I intend to publish a new post every day with a map showing our progress but this depends on my ability to find a decent enough network connection.